By default you can’t write to Windows NTFS hard disk and USB drives as they appear as read only on the Desktop’s of OS X users  – which is a bit of a pain in the ass!

This post has been updated March 2013 and uses the newer fuse4x version 0.9.2

To start with you are going to need Xcode and some Unix style application packages  – and what makes this easy on OSX is Homebrew, a package manager for OSX, follow this guide if you haven’t already got it,it will get you up to speed on both Xcode and Homebrew first, after that come back here and tackle the rest below which involves installing a couple of apps and tweaking a couple of files.

Any necessary dependant software will also get installed including autoconf, automake and libtool 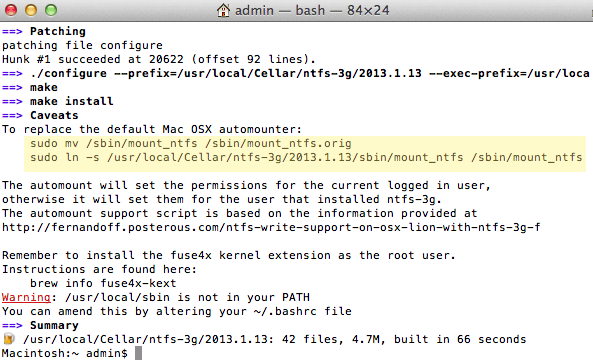 At this point your are prompted to change the mount_ntfs file, the new file will allow the writes to NTFS, these commands will back up the original and then link to the modified one as supplied by Brew/ntfs-3g

The last install is the fuse4x 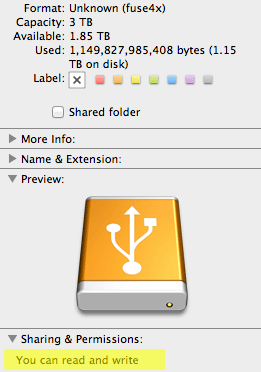 Thats it, now all mounted NTFS drives can be written to, if it doesn’t work off the bat try a restart.

For reference the modified mount_ntfs file that was linked to earlier in the process is similar to Fernando Figueiredo with a very minor tweak (his tutorial uses Mac Ports).