Sounds like a B-grade mess –  from the iPhone, SHSH blobs! Whats it all about? SHSH blobs 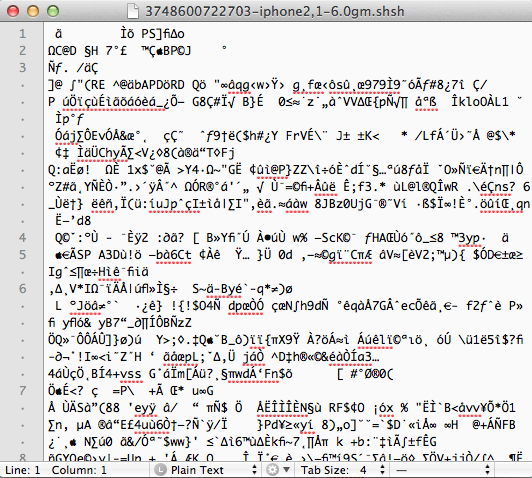 Looks exciting doesn’t it! Well thats what it looks like in a text editor, its a secure encrypted file known as a key, its about 4KB in size and is also known as a HASH signature which is sent to your  iOS device from Apple after your device requested a restore to an iOS version (the iPhone/iPad/iPodTouch Operating System).

The request from the idevice is made over the internet to Apple Servers and a key is generated and sent back to the device.

It’s a HaSH file that contains your:

Apple only allows a restore to the current iOS version, it closes the window of opportunity on restoring older iOS versions when a new one is released. You can’t generate them and each one is unique – however you can make a copy and back them up.

By backing them up is what allows you to restore to an older iOS version.

Apple got wise to users using the old SHSH blobs to restore older firmware and introduced a variable into the mix – a randomised number known as a Ticket or officially an APTicket which you can only check in once, as each time the device boots it generates a unique Ticket number which is sent to Apple which is then in turn returned in the blob/key.

If the SHSH blob with the Ticket is attempted to check in again with an incorrect number – Computer Says No.!

Well it says no to iOS 5.1.1 and onwards earlier iOS versions can circumvent the APTicket requirement as they are not subject to it.