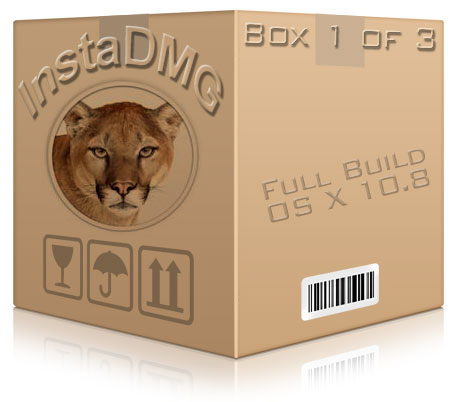 This is an introductory tutorial on using InstaDMG, a OSX package and image maker,  to create clean never booted disk images of OSX 10.8 Mountain Lion.

For those not familiar InstaDMG is a powerful command line tool application used to produce clean never booted OS X images, these images can include OSX incremental upgrades as well as 3rd party software and scripts.

This guide is for getting a clean never booted up to OSX 10.8.4  Mountain Lion Image. You will need the OSX 10.8 installer which is named the InstallESD.dmg

Navigate to your home and create a directory name ‘instadmg’ and change directory to it.

As new OSX updates are made available the InstaDMG code is changed to include the new upgrades, to update InstaDMG, move into the directory it is installed in and run the svn update command:

Preparing the Base OS X 10.8 Image

Move the InstallESD.dmg file from Mountain Lion in the path below in your InstaDMG location and move onto the next section:

The catalog file is the all important file that contains the installer build numbers plus all the incremental OSX updates, the latest version of InstaDMG now has an OSX Mountain Lion 10.8 catalog file as at version revision 480.

– Below are the OSX incremental updates in the format of name, download link and SHA1 encryption key – these are tab separated on one line per item (grab shows them soft wrapped).

– If you don’t want to include a certain update in the build just add a comment (#) to the beginning of the line. 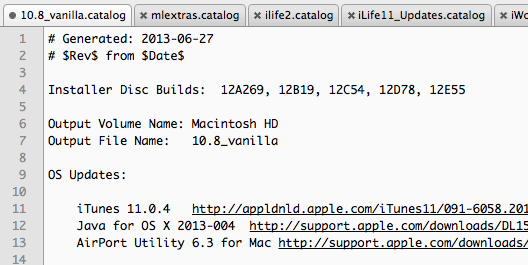 If you only have an older install build you can add the latest OSX 10.8.4 combo, by adding in the update in the OS Updates section just paste in the line below. 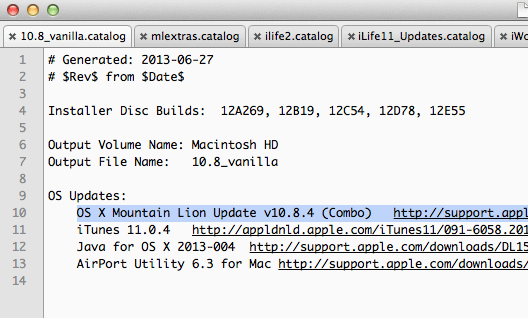 Move into the InstaDMG location and to build the image you run the all important instaUp2Date command with sudo.

The .catalog extension does not need to be added in running the command. The command will take a while to run depending on your RAM and processor power. The OS X incremental updates are downloaded and stored on your local drive, future builds will only pull down new updates.

The disk image is spat out in the directory – “~/InstaDMG/OutputFiles” named “10.8 Vanilla.dmg” which is the all-encompassing new master image. The final output at the tail of the command in the Terminal will be like this:

And there you have it one OSX 10.8 image ready for deployment, which can be used in any deployment method including ASR, DeployStudio or as a NetBoot image.

You may get errors when running the command above such as:

But you do have the installer disc filed in the right place! – just reboot and try again.

You could push this image to another drive using ASR – this will erase your target Volume:

Part 2 of this InstaDMG tutorial takes you through setting up a local user account on the images and adding files that allow you to bypass registration process.

Part 3 take you through setting computer prefs and system preferences